‘A Refuge From The Roar’: Yosemite Welcomes Visitors

People take pictures at Yosemite National Park’s Glacier Point with Half Dome as a backdrop in July 2019. 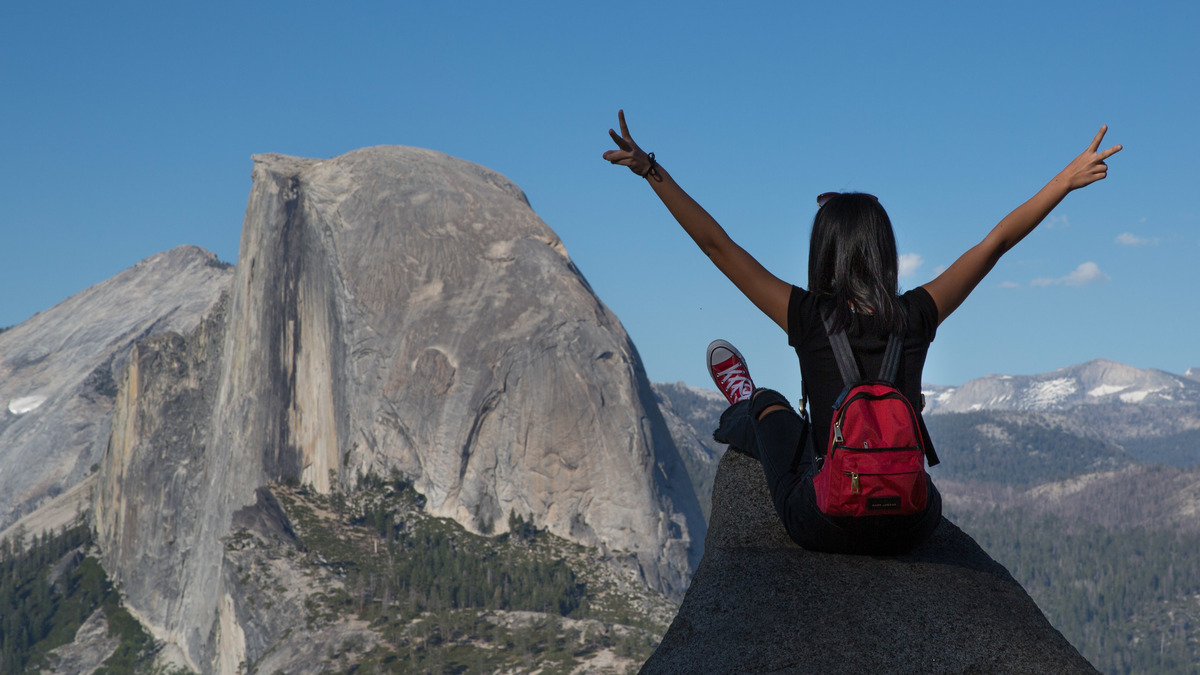 People take pictures at Yosemite National Park’s Glacier Point with Half Dome as a backdrop in July 2019.

Writer and conservationist John Muir is widely credited with the creation of Yosemite National Park in 1890. He described it as “A place of rest, a refuge from the roar and dust and weary, nervous, wasting work of the lowlands.”

At the time, Muir probably couldn’t have imagined that millions of visitors would flock to Central California every year to visit Yosemite. The park encompasses 760,000 acres and attracts tourists from all over the world, although Californians make up 89% of total park visitors.

When COVID-19 forced the park to close its gates on March 20, it was no longer a refuge for those hoping to seek solace in the wilderness. It wasn’t until the park reopened on June 11 that visitors could once again look for “that place of rest.” At least for half of the intended visitors, with guests limited to about 50% of regular capacity.

Visiting Yosemite over the summer required a day pass, which was easier said than done, according to Graham Ottley, general manager and senior guide at Southern Yosemite Mountain Guides. Passes had to be booked in advance, but often times sold out within minutes of going on sale. Some visitors were unaware of these restrictions.

“There were people showing up to the gates not knowing the restrictions in place and getting turned around,” Ottley said. “They were in for a pretty big surprise when they realized [Yosemite] was inaccessible.”

The summer is traditionally the busy season for Ottley, but because of the pandemic, Southern Yosemite Mountain Guides did about half of its usual business. “It was a slow start to the summer with all the unknowns. The phones were dead for a while, we didn’t see that big push in the early spring,” he said. “A lot of companies just closed their doors, and I totally understand that. There’s a lot of interaction with guiding and it can be challenging to manage.”

However, as of November 1, Yosemite’s day use permit requirement came to an end, allowing visitors to come and go as they please.

“There is a great shoulder season in Yosemite before and after the summer that is worth considering for visitors, especially now that they are not trying to get an elusive day pass,” Ottley said. “There’s not a flood of people trying to get into Yosemite right now.”

With day use restrictions lifted, once again, the mountains are calling. Yosemite and its vast expanses offers visitors a chance to pause and reflect. Ottley likes to contemplate under the stars. “Yosemite is unlike any other place in the world,” he explains. “It helps us remember we are relatively small specs of dust in this larger landscape. That sense of awe and perspective shift, realizing there is a bigger thing out there than ourselves.”

In Other News: 2 Kayakers Were Almost Swallowed By A Whale. The Video Is Wild.