At a Saco, Maine, campaign rally for President Trump in September, a protester holding a sign detailing the effects of climate change on the Gulf of Maine (left) came face to face with Trump supporters who had different views. 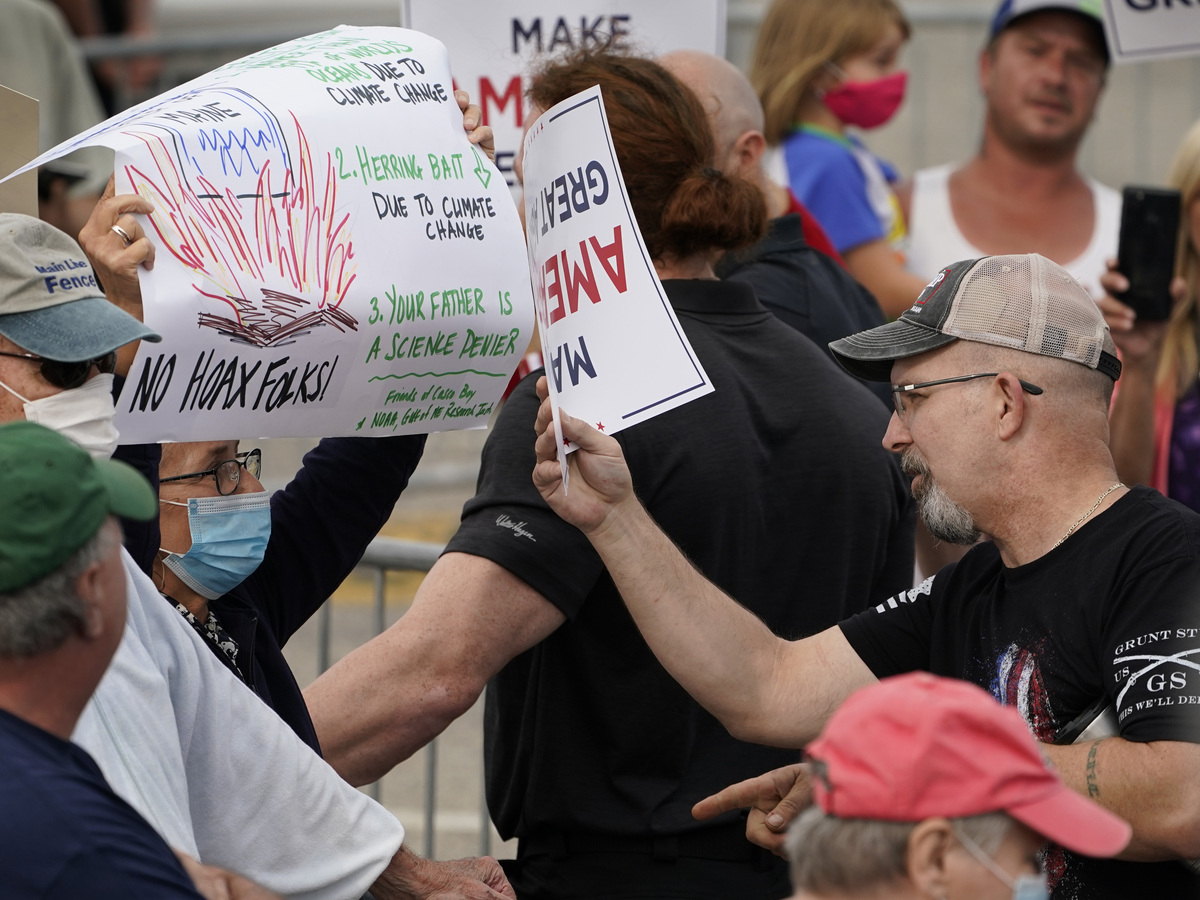 At a Saco, Maine, campaign rally for President Trump in September, a protester holding a sign detailing the effects of climate change on the Gulf of Maine (left) came face to face with Trump supporters who had different views.

In his campaign for president, Joe Biden proposed the most aggressive plan to tackle climate change of any major party nominee and made climate justice part of his closing argument. But his goal of making the U.S. carbon neutral by 2050 relies on major action from a Democrat-controlled Congress, which does not appear likely — or is at least not certain, pending the outcome of two runoff Senate races in Georgia in January.

“It won’t be as ambitious, no two ways about it,” says Gene Karpinski, president of the League of Conservation Voters.

Still, he and others think Biden will be able to take meaningful executive action and possibly forge some compromise even if the Senate continues to be controlled by coal-friendly Kentucky Republican Mitch McConnell.

The change at the top could not be more dramatic given that President Trump has repeatedly questioned climate science and rolled back dozens of Obama-era climate rules as he aimed to boost fossil fuel production. A Biden administration could move to reverse much of that.

Among many other things, Biden has said he would stop leasing any new oil and gas rights on federal land and water. He could also direct agencies to tighten emissions standards for the electricity sector, to push it toward his goal of net zero emissions by 2035. And he could raise fuel economy standards for cars and trucks to speed up a transition to electric vehicles.

Of course — just as Obama and then Trump have seen — executive action is subject to legal challenge, and Biden will face a judiciary stacked with more conservative appointees who may favor deregulation. Even if his policies survive that, they could again be reversed by a future president.

Biden may have more immediate sway using foreign policy to push for climate action. He has already vowed to rejoin the landmark Paris climate agreement as soon as he takes office. Trump announced his intention to withdraw from the agreement in 2017; that took effect the day after the U.S. presidential election, after a mandatory waiting period.

Biden could also have the U.S. rejoin the World Health Organization, which can help address public health risks from global warming. And he could use trade deals and other international agreements to pressure countries to reduce their own greenhouse gas emissions, drive clean energy technology or limit deforestation, for example.

Reaching across the aisle

Climate legislation would be more enduring than executive action but may prove far more difficult. Still, many expect Biden to try mightily, given that he has focused much of his political career on reaching across the aisle.

“I am bullish on the prospects for actually achieving something in the Congress on climate change in the next couple years,” says Scott Segal, a partner at the energy law and lobbying firm Bracewell, whose clients include fossil fuel companies.

For one thing, Segal points out that industry is moving toward a clean energy economy anyway. Pressured in part by consumer demand, a number of utilities have set their own zero-carbon goals, and some oil companies vow to invest more in renewables. A growing list of major companies, along with cities and states, are also setting aggressive targets for carbon neutrality.

“It’s not like the same level of blowback would occur, from an economic perspective, as might have been the case if we were discussing this 15 or 20 years ago,” he says.

Segal suggests there could be bipartisan agreement on things like batteries and energy storage, carbon capture and clean energy standards for motor vehicles.

Biden’s climate plan calls for investing $2 trillion over four years on a wide range of environmental projects. Allies hope he can chip away at some of that in various spending bills and say some things should be an easy sell.

“Investing in renewables and energy efficiency generates more than twice as many jobs as investing in fossil fuels,” says Andrew Steer, president and CEO of the World Resources Institute.

Meanwhile, there’s something else that might continue to shift the political dynamic.

2020 is on track to be one of the hottest years on record, and that heat has helped fuel unprecedented wildfires and an unrelenting hurricane season. Climate scientists say a dramatic reduction in greenhouse gas emissions is needed soon to avoid even more catastrophic impacts.

Two-thirds of Americans — including a majority of Republicans — say they want the government to do more on climate change. The question is whether Biden can coax a divided Congress to heed that and finally take significant action.

What $1.25 Million Buys You in Maine, Texas and New York

This Powerful Democrat Linked to Fossil Fuels Will...

Maine’s Next Generation Of Lobstermen Brace For Unprecedented...

Boris Johnson to call for climate action at...

Celebrate The End Of Summer With Monday’s Harvest...

SpaceX Inspiration4 Crew: Who Was Aboard the Civilian...