These men, harvesting sweet potatoes in North Carolina, came to the U.S. on H-2A visas that are designated for seasonal agricultural workers. Such “guest workers” now account for about ten percent of U.S. farm workers. 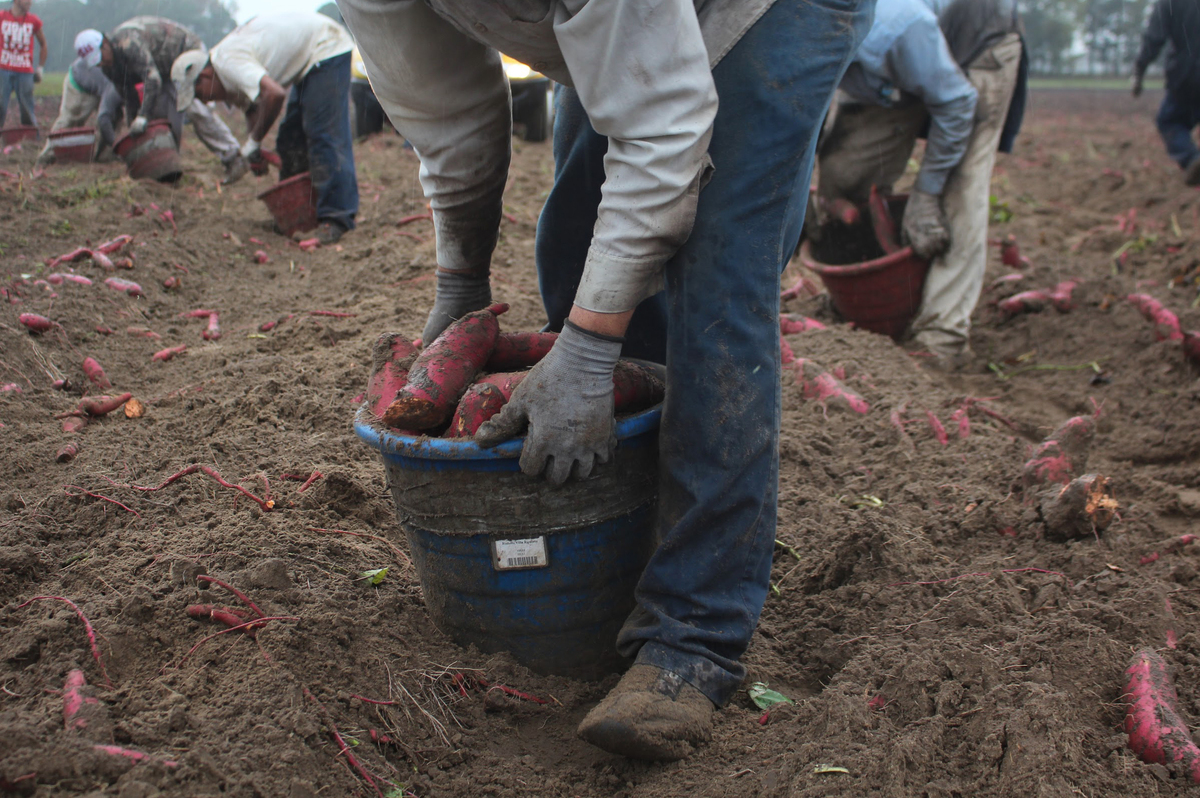 These men, harvesting sweet potatoes in North Carolina, came to the U.S. on H-2A visas that are designated for seasonal agricultural workers. Such “guest workers” now account for about ten percent of U.S. farm workers.

While most people in the country were focused on counting votes last week, the U.S. Department of Labor published some controversial new rules dealing with farm labor.

The rules apply specifically to workers like Celso Gonzalez. His home is in the Mexican state of Hildalgo, where work is hard to find because of the pandemic, he says. If he did manage to find work, he might make the equivalent of $7 a day.

Instead, he’s working in the fields of North Carolina. Tobacco and sweet potato farmers there arranged for him to get a special H-2A visa for seasonal agricultural workers. More than 200,000 such workers came to the U.S. this year, and the number is growing.

By law, workers like Gonzalez aren’t supposed to take jobs away from U.S. workers, or undercut their wages. So the government carries out a survey of farm employers to see what they are paying similar U.S. workers, and then calculates an hourly wage for H-2A workers that will avoid any “adverse effect” on U.S. workers. In North Carolina, that rate is $12.67 an hour. It’s about dollar less in Florida, and two dollars more in California.

That rate has been going up faster than inflation in recent years, because there’s a shortage of farm workers, and some employers have been complaining about those wage increases.

In recent weeks, the Trump Administration stepped in with some changes to the program.

First, it abruptly cancelled the survey of farm wages that has been used to calculate those minimum wages. Justin Flores, vice president of a union group called the Farm Labor Organizing Committee, which represents some H-2A workers, had an idea of what was coming. “My first thought was, the Trump Administration is coming after our members’ wages and financial well-being,” he says.

Then, last week, the administration announced a new regulation that freezes the wages for H-2A workers at this year’s level for the next two years. Starting in 2023, according to the new rule, wages for H-2A workers will be tied to an national index of worker pay that’s generally been rising more slowly than farm worker wages.

The administration estimates that the change will result in farm workers earning about $170 million less in wages each year.

“Farm workers should be paid more, not less, especially as they work under the conditions that we’re seeing during this pandemic,” Tellefson Torres says. The UFW also argues that paying cut-rate wages for foreign workers will undermine wages for U.S. farm workers as well.

Employer groups, including the American Farm Bureau Federation, welcomed the change. Craig Regelbrugge, a senior vice president of the industry group AmericanHort, which represents landscapers and plant nurseries, says the new system is likely to be more predictable. The current system, he says, sometimes produced sudden jumps in wages, and also had a built-in upward bias. “Each year, it takes the average [wage] and makes it the minimum,” he says. “It’s designed to make sure that wages go up and up and up.”

Despite those increasing wages, employers have been hiring many more H-2A workers in recent years. Over the past five years, the number of H-2A positions approved by the Department of Labor has almost doubled. They now account for about 10 percent of all farm workers.

Regelbrugge says it’s the result of a worker shortage. Fruit and vegetable farmers, in particular, can’t find enough people here in the U.S. to do this physically demanding and skilled work.

He insists that employers can’t pay higher wages to attract more domestic workers because they would then be unable to compete with cheaper imported food. “It really comes down to the question, can we farm successfully here, or are we going to become more and more reliant on foreign entities to feed us?” he says.

Farm worker advocates say that’s an overblown fear. According to their calculations, if farm worker pay went up by 40 percent, an average American household would only pay an extra $25 for an entire year’s supply of fruits and vegetables.

The next administration could reverse this decision, but the process would likely take a year or more.

A Tough Call for Families: How to Spend Thanksgiving