A truck flounders in a flooded street in Puerto Cabezas, Nicaragua, just hours before Hurricane Iota made landfall in the country Monday night. By Tuesday morning, the storm had significantly weakened, but it still poses life-threatening dangers for residents in its path. 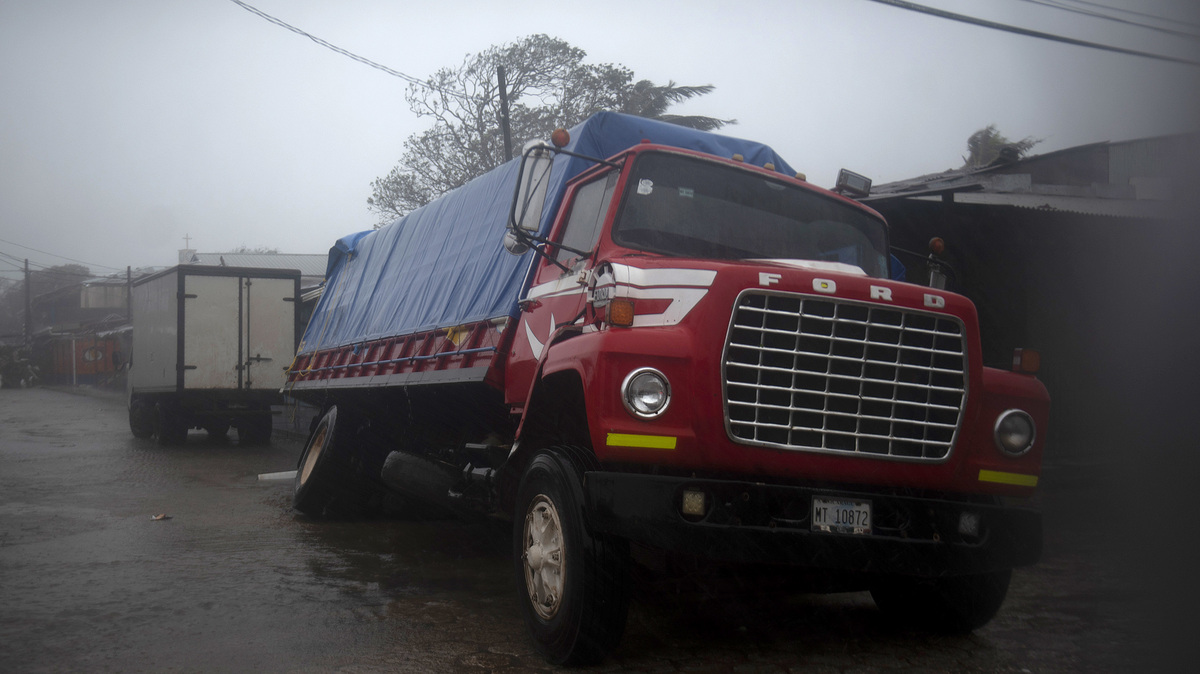 A truck flounders in a flooded street in Puerto Cabezas, Nicaragua, just hours before Hurricane Iota made landfall in the country Monday night. By Tuesday morning, the storm had significantly weakened, but it still poses life-threatening dangers for residents in its path.

Hurricane Iota, the second strong hurricane to batter Central America in as many weeks, is running aground in northeastern Nicaragua. The storm, which made landfall as a Category 4 hurricane Monday night, had rapidly diminished to Category 1 by Tuesday morning, with maximum sustained winds of about 75 mph.

The weakened storm is still predicted to pack a wallop, though, with the storm surge expected to lift coastal water levels by up to 10 feet and winds heavy enough to cut a swath of destruction along the border of Nicaragua and Honduras. Authorities are also warning of flash floods and landslides.

As of Tuesday morning, there were no reported fatalities linked to the storm.

Hurricane Iota represents a challenging threat to a region that is already struggling to recover from another recent catastrophe: Just two weeks before Iota came ashore, Hurricane Eta made landfall as a Category 4 storm in its own right.

Eta left scores of people dead in the floods and landslides that racked the region from Panama to Mexico, before finally breaking up over Florida.

“While the winds of Iota are weakening, there are still life-threatening hazards ongoing for [C]entral America, including flash flooding and mud slides, which could result in potentially catastrophic effects, especially when compounded upon Hurricane Eta’s destruction from a couple of weeks ago,” the National Hurricane Center explained in its 10 a.m. ET advisory.

The pair of haymakers, Hurricanes Eta and Iota, made landfall just 15 miles apart along Nicaragua’s Caribbean coast, delivering a one-two punch that has residents reeling and officials scrambling to offer relief.

“Right now, it’s a race just to keep up among those trying to help,” Matt Hackworth of Lutheran World Relief tells NPR’s Morning Edition. He says in Honduras, where he is based, that means a collaboration between authorities and international aid groups to set up workable shelters and get evacuees safely into them.

The trouble is, many of these makeshift shelters “were never designed to hold this many people,” Hackworth adds, especially with the coronavirus pandemic making cramped spaces indoors particularly dangerous for evacuees.

“This is a country where about half the population doesn’t have enough food to eat on any given day,” Hackworth says. “Even without a disaster, Honduras is a challenging place just to make sure that the everyday needs are met. And of course, all of this happening during a global pandemic — no possibility of social distancing, obviously, in those sheltering situations.”

Hurricane Iota has the grim distinction of being the strongest hurricane on record to make landfall in Nicaragua in the month of November, according to Philip Klotzbach, a meteorologist at Colorado State University. He notes on Twitter that the record had briefly belonged to Hurricane Eta before Iota surpassed it.

As the 30th named storm — and the strongest — of 2020, Iota also tops the busiest Atlantic season ever recorded. The season has been so packed with catastrophe, in fact, that for just the second time in history, forecasters had to resort to the Greek alphabet after exhausting the World Meteorological Organization’s list of 21 potential storm names.

The huge storms of this historic hurricane season are no aberration, either. Hurricanes tend to gather greater size and strength when they develop over warmer water. As the Caribbean and the Gulf of Mexico get warmer due to climate change, the storms that form above them have often more energy to draw on, and quickly.

Researchers have found that, because of climate change, storms are likelier to rapidly intensify into major hurricanes — just as Iota did, when it briefly reached Category 5 over open water before its landfall.

The immediate forecast, at least, offers some hope for those in Iota’s path. The National Hurricane Center expects the storm to rapidly weaken over the next 36 hours as it moves toward El Salvador across the mountainous terrain of inland Nicaragua and Honduras.