An airplane flies over caribou on the coastal plain of the Arctic National Wildlife Refuge, where the Trump administration is moving to sell leases for oil drilling. 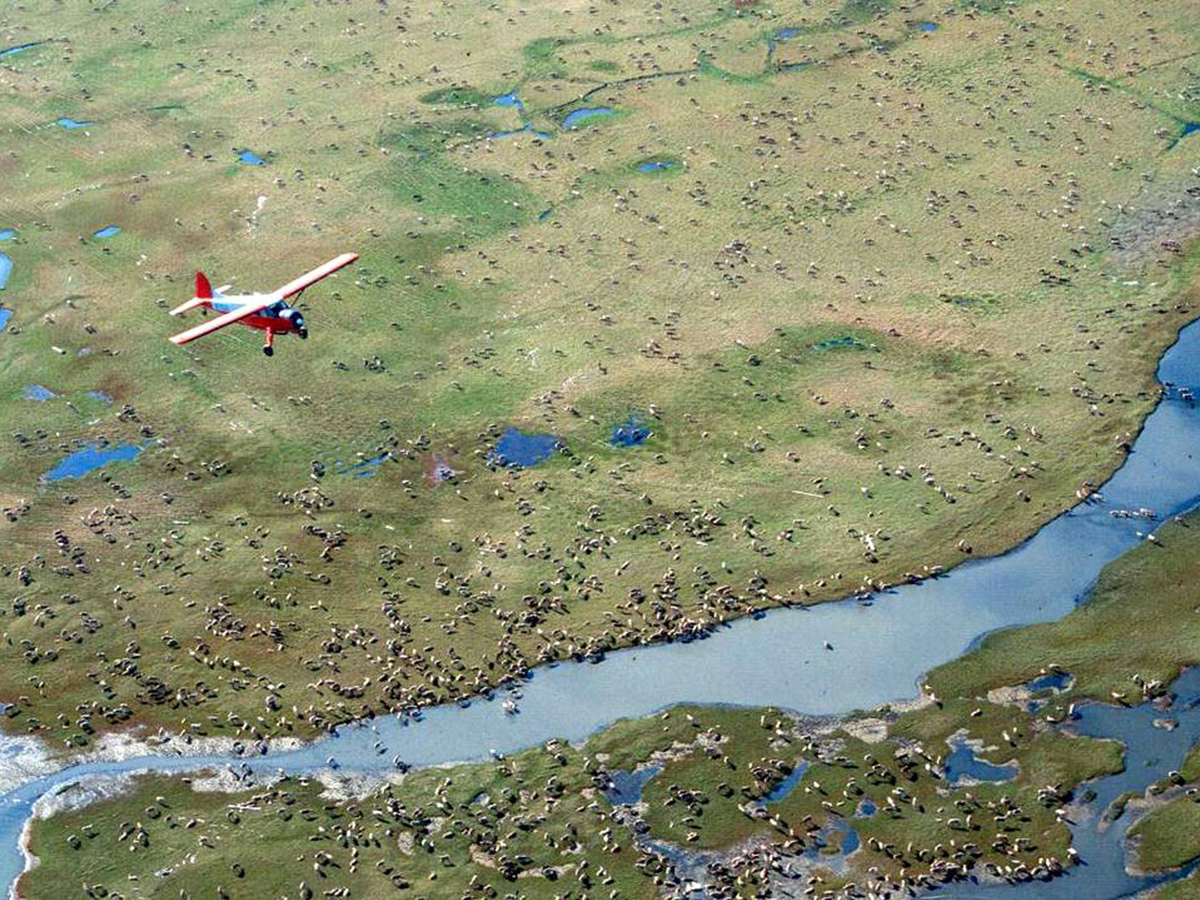 An airplane flies over caribou on the coastal plain of the Arctic National Wildlife Refuge, where the Trump administration is moving to sell leases for oil drilling.

Starting Tuesday, oil and gas companies can pick which parts of Alaska’s Arctic National Wildlife Refuge they’re interested in drilling. It’s the latest push by the Trump administration to auction off development rights in the pristine landscape before President-elect Joe Biden takes office.

The official “call for nominations” launches a 30-day comment period. It will also allow the Bureau of Land Management to move forward with a lease sale, which it must announce 30 days in advance. The exact timing is not clear, but it raises the possibility that a lease sale might happen just days before Biden’s inauguration.

“It’s been quite a lot of work to get to this point,” says Kevin Pendergast, Deputy State Director for Resources with the BLM in Alaska. In a separate statement, the agency said the lease sale will be a historic move “advancing this administration’s policy of energy independence.”

In a dramatic shift after nearly four decades of protections, a Republican-led Congress in 2017 approved legislation that opened up part of the refuge to oil development. It called for two lease sales in the coastal section of the Arctic Refuge within seven years, with the first one to be held by the end of 2021.

But conservation groups are blasting the Trump administration’s decision to push forward with the sale now, just a couple months before Inauguration Day, saying it’s rushing the process “to open one of the nation’s most iconic and sacred landscapes to oil drilling.”

The Arctic refuge’s coastal plain is about 1.6-million-acres — an area roughly the size of Delaware that makes up about 8% of the vast refuge. It’s a place where caribou migrate, polar bears den and migratory birds feed. It’s also an area believed to hold billions of barrels of untapped oil.

“This timeline indicates that they’re trying to cram this through in a way that would cut out consideration for public concern,” says Brook Brisson, senior staff attorney at Trustees for Alaska, an Anchorage-based environmental law firm.

Trustees for Alaska is among several groups, and a coalition of 15 states, that filed lawsuits earlier this year aimed at derailing drilling plans for the Arctic refuge. The suits are still winding their way through the court system.

The American Petroleum Institute, a national trade association, welcomed the call for nominations, saying in a statement that development in the Arctic refuge is long overdue, will create good-paying jobs, and provide more revenue for Alaska. It said the industry will work with wildlife organizations and local communities “to safely and responsibly develop these important energy resources.”

Alaska Natives are split on the issue, with some seeing opportunity from drilling while others decry the impact on wildlife, most notably the Gwich’in, whose culture and diet revolve around migrating caribou.

“Any company thinking about participating in this corrupt process should know that they will have to answer to the Gwich’in people and the millions of Americans who stand with us,” said Bernadette Demientieff, executive director of the Gwich’in Steering Committee, in a statement.

But it’s not clear how much interest there will be in drilling. For one thing, it’s expensive in such a remote area.

“The real trick is doing the math around the marginal cost of producing a barrel of oil in that area of the world,” says Andy Mack, a former commissioner with Alaska’s Department of Natural Resources who’s pushed for the refuge’s opening.

Other challenges are low oil prices, the coming change in administration, and the risk of more litigation over environmental concerns. Some investors have said they won’t fund new oil and gas projects in the Arctic.

Biden says he plans to permanently protect the Arctic refuge, and ban new oil and gas permitting on all public lands and waters.

If drilling leases are finalized before Biden takes office they could be difficult to revoke, says Mack. But even if not, Biden would still face that federal law that mandates a lease sale by the end of 2021. Still, Mack says the next administration could impose restrictions.

“What they would try to do is make it so difficult and so onerous to get the array of permits,” he says, “that the companies just say, ‘Well, we’re not going to spend ten years just trying to get a simple permit, we’re going to put our money and our investment elsewhere.'”

Ramen From the Masters, Shipped to Your Home

Wanted: A Recipe With a Back Story